Where women write their books 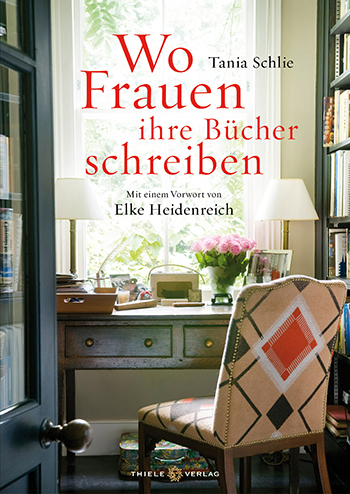 »We meet authors who can’t live without writing (Ingeborg Bachmann), those who use writing to work through personal tragedy (Isabel Allende) or to escape their own uneventful lives (Jane Austen), but also those who conceive and write their books beside the cooker to earn the money to do up the house (Agatha Christie).« Tania Schlie

Women write books in all sorts of places. They say that Nobel Prize winner Toni Morrison wrote her books at the kitchen table among plates and breadcrumbs. For Colette, who was confined to her bed for years because of arthritis, the bed was her »raft-like divan« where she used to write. There are writers with no fixed abode who don’t need a fixed place to work, who are always on their travels and can write anywhere. And there are the others who need fixed times and rituals to get their thoughts down on paper.

This book introduces us to fifty women writers and poets. The oldest of them lived in the eighteenth century, the youngest is a child of our times. We see pictures of the rooms where these women lived and wrote, their desks, manuscripts and books, posing the question: what living aura emanates from these female authors’ writing refuges, and how did these places colour their lives and writings?

Tania Schlie (born 1961) studied literature and politics in Hamburg and Paris. She has worked as a publisher’s editor, has been a free-lance writer for fifteen years and now lives with her family in Glückstadt. Thiele Verlag has published her successful works Women by the Sea (with a foreword by Elke Heidenreich), Women in the Garden (with a foreword by Eva Demski) and Moments of Leisure (with a foreword by Doerthe Binkert).